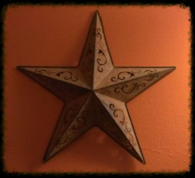 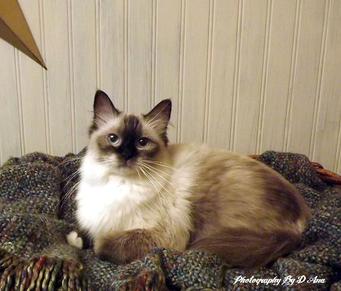 For the Love of The breed

[True Ragdolls have blue eyes because they are a pointed breed]

Ragdolls are known for their tendency to go limp when picked up, like a child's toy. They are sometimes referred to as gentle giants. They adore their humans and exhibit puppy like behavior as they follow you around the house always wanting to be by your side. They are gentle and tolerant with children and other pets. They are well behaved and eager to please their owners.

Ragdolls were developed in the 1960's by experienced cat breeder, Ann Baker. Throughout the following 2 decades, Ragdolls were selectively bred for their desirable traits; large size, calm and gentle demeanor, their tendency to go limp when picked up and their striking pointed coloration. In the 1970's the breed received mainstream recognition and the Breed Standard became Nationally accepted by major cat registries.

Though Ragdolls are long-haired, it consists mostly of guard hairs and minimally dense undercoat, this results in a favorably fluffy coat that is low shedding and mat resistant. They only need very minimal grooming, which they tend to relax and enjoy.

Ragdolls, like all pointed breeds, are born entirely white. Temperature causes the hair to produce it's pigment which will develop slowly. Full color intensity will appear by 2 years, full coat by 2-4.

The 6 primary colors are:

{There is also a tortoiseshell variation which combines 3 of those colors a.k.a. Tortie}

For each color there are 4 different patterns:

{One of the colors which darkens on the felines "points" i.e. nose, ears, tail & paws}

{Same as pointed but with white paws & abdomens, may or may not have a white blaze on the face, must have the white belly stripe & a white chin}

{White Inverted "V" on the face, white legs and may or may not have white spots on the back. Excessive amounts of white, known as high white, produces the VAN pattern}

​{A variant of the above coloring with Tabby markings} 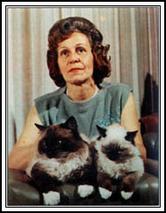